Here’s a fundamental law about Eve: any penalty imposed on players will tend to hurt the most organised groups least.

In other words, if CCP don’t like something, and they try to make it harder to do it, then the people that get hurt will be the younger, smaller or more casual groups. The ones who work around it will be the larger, more established groups who can bring their organisations to bear on the issue.

As I said yesterday, I’m pretty positive about the suite of changes announced by Greyscale: I think that they would be better timed if announced in parallel with substantial enhancements to nullsec to allow greater density of living, but I am sure that that must be coming very soon.

The Good Stuff: All That Warning

From the point of view of the established blocs, one reassuring factor in these changes has been the amount of warning and information we have had in advance.

Normally, these sort of changes go through the CSM, who sign NDAs and can’t tell nullsec leadership what is in the pipeline. This time, CCP avoided using the CSM in the main and went direct to a nullsec figure who had posted about his ideas: celebrity Fleet Commander Manny of Pandemic Legion. Since Manny isn’t bound by an NDA, much of nullsec has been aware (or at least those whose FCs play DotA together have been!) about what is in the post. As I was on the record as applauding Manny’s changes, I for one was pretty relaxed about what would be announced, which is why I didn’t bother blogging any further once I started to find out what was coming.

The political machinations behind the scenes to prepare for these changes have therefore been going on for at least a couple of weeks: at least one very major player in the current balance of power has seen this as a chance to return to their roaming roots/cast off the shackles of sov etc etc, and some very interesting changes may result.

Don’t get me wrong: I do think that the CSM should have been more involved, and I understand why they are pretty peeved. But from the point of view of the nullsec bloc, having one of “our own” driving the change is certainly comforting.

This should explain why the CFC, N3 and the like are relatively sanguine about the outlook following the changes announced this week. Yes: living in nullsec, outside of a few locations with superb empire proximity, will be made massively harder thanks to the Jump freighter (and, to a lesser extent, Rorqual) changes but we’ll be able to work around that due to the resources our blocs offer. People in the Drone regions, and in the deep south, will be stuffed.

The Picture of Dorian Grayscale

As you’d expect with radical changes, the outlook is not great for everyone.  The same issues about proximity to Empire that made our renter empire harder to defend last month now make our hostiles’ deep, safe space utterly horrible even to live in tomorrow. Look at this map (one of a suite created by Innominate for our analysis): 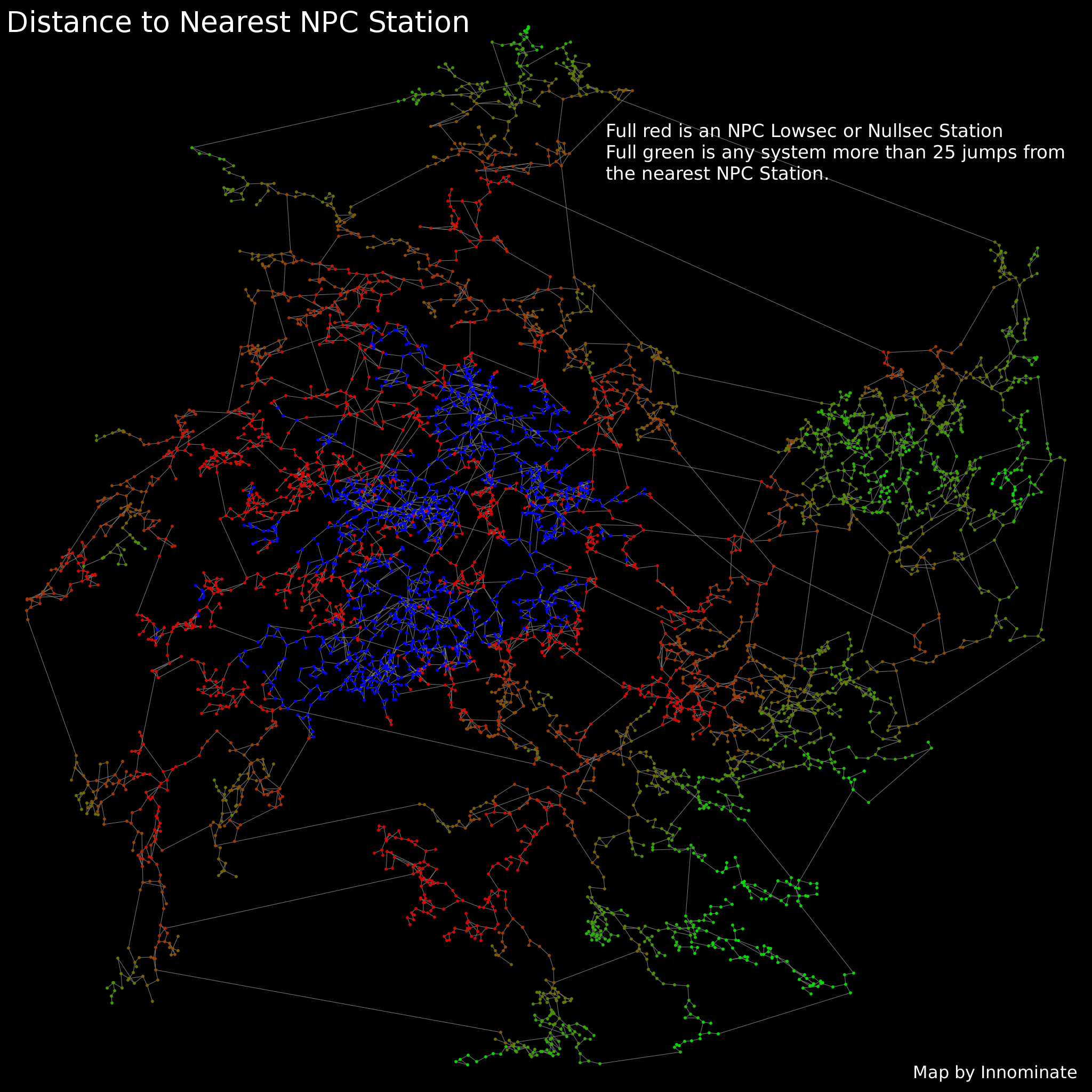 You can pretty much assume that everything in green is essentially space hell for anything volume-intensive like running POSes for someone without a sizeable logistics group with redundancy built in.  Unless, that is, you believe that MMO players are not lazy seekers of the path of least effort, and that they will create Internet Space Autarky instead of moving where the going is good:

There is a disputed quote, often attributed to Bradley, that says “Amateurs study strategy, professionals study logistics”. A great many people on the Eve Online forums – none of whom have ever run a nullsec war – are looking at the announced changes and rubbing their hands over the death of the CFC. I was told, yesterday, that the CFC would “struggle to hold onto ten systems”. Serves me right for commenting on en24. A far smaller group – those who can see the outcomes more clearly – are looking at these changes and thinking “this entrenches the blocs”.

I’m torn. I want Eve’s current landscape to burn. Those who read this blog will know how radically I want to shatter everything about the blocs. And I genuinely pity those who depend on Black Frog, for instance, since they themselves have described why that will be driven to the edge of extinction. But until the big changes happen – and I am certain that Greyscale and Seagull will have a plan for the positives that will make these nerfs make sense, then at least these changes will make life easier for us to keep what we have.